In September 2016, Theresa May announced the launch of a competition to design a National Holocaust Memorial and Learning Centre in Victoria Gardens, Westminster. Ninety-two teams from 26 countries entered the competition, with a shortlist of ten developing full design proposals including physical models of their designs.

We work on so many interesting projects that to rephrase the infamous quote from Forest Gump "Exhibitions are like a box of chocolates, you never know what you are going to get".

Back in January, what started out as a relatively straight forward display solution evolved into a roadshow that would take us quite literally across the UK, involving us in a project that would leave it's mark on all of us.

In September 2016, Theresa May announced the launch of a competition to design a National Holocaust Memorial and Learning Centre in Victoria Gardens, Westminster. Ninety-two teams from 26 countries entered the competition, with a shortlist of ten developing full design proposals including physical models of their designs. The aim of this iconic memorial was to ensure that the stories from survivors was not forgotten and that generations to come would be able to learn about them, almost first hand.

We were on a particularly tight turn around as we were advised that the first unveiling needed to take place at a reception in an undisclosed location in London - the day before Holocaust Memorial Day. What then came to light was that we were installing in Downing St.

I don't think I can put into words what an amazing experience this was. The site visit was the most unusual I have ever done and can probably never be topped, sat on the same sofa that the Queen and Barak Obama have sat on, along with so many other high profile figures.

The install itself involved every resource we had to ensure we could meet the immensely tight deadline. We had a very tight time slot, regardless of the obstacles we needed to manage. Everything had to be in place ready to welcome the jury, the dignitaries, representatives from the 10 finalist teams but most importantly the holocaust survivors who had also been invited.

This is an incredibly busy building and as we waited to enter the infamous cobbled street, we were advised that there was petition being presented to the infamous black door. Wouldn't have been prudent to have our van in the shot! So we waited patiently only to realise that the petition was for the call for the last surviving Dam-buster "Johnny' Johnson to be given a knighthood. And who should be delivering it, none other than Carol Vordeman. Cue the selfies.

So once we were in, the first thing we did was a risk assessment with the crew, up the famous staircase decorated with photos of all the previous prime ministers, past the priceless sconces which led up to the multi-million pound Lowry. No pressure, our team are always incredibly careful but you could sense the pressure when these priceless, irreplaceable items were pointed out.

To say we were so incredibly proud of our team that evening is an understatement. Impeccably focused, conscientious and they pulled out all the stops to ensure that we hit the deadline. No different to any install we do but you'll forgive me for saying that the bar for this particular install was raised higher than ever before.

We were taken aback when we were invited to the evening reception. It had been a long day but not one person turn down this opportunity, not only to attend an evening reception at Downing St but to be in the presence of some of the survivors was very humbling.

Receiving this the next morning made us even more proud:

"Please pass on our most heartfelt thanks to your incredible team who did an absolutely brilliant job yesterday.

I wasn’t sure quite how the ginormous task of transforming Downing Street into an art gallery within a few hours was going to actually happen but it did! And so smoothly and painlessly! Every member of your team was completely unflappable, had a brilliant eye for detail and endless patience as I changed my mind and asked stupid questions! As a bonus we didn’t smash any lamps, scratch any priceless artworks or even take any lumps out of historic corridors!

It was a really emotional sightseeing those beautiful models set up in the State Rooms after years of hard work on this project and really fantastic to have survivors and others see us start to deliver on our promise.

Thank you again. We’re looking forward to working with you all again over the coming weeks. 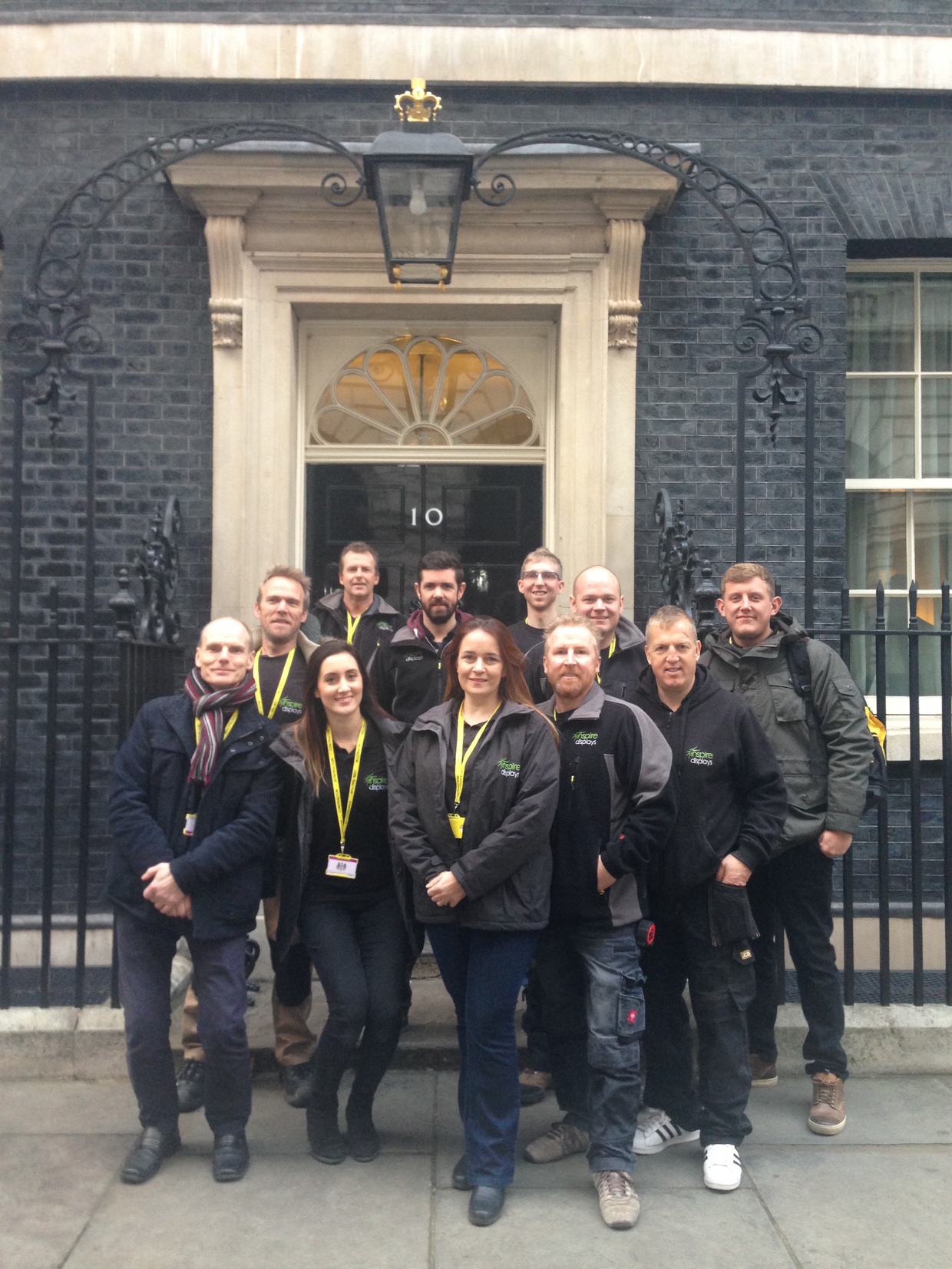 From Downing Street we then took the exhibition on a journey across the UK and at a multitude of unique venues. I could talk about this all day but I will be kind and reluctantly be brief.

Downing St was closely followed by The Palace of Westminster, again a very different site visit. And on the very day that Parliament was called to vote on Article 50. It's not every day your foot is trodden on by David Blunkett's guide dog, Cosby.

This install had, as you would expect, just as many 'considerations' from floor protection of the centuries old York Flagstone floor in the great hall to the very unique and specific security requirements for both the staff on foot as well as the vehicles bringing the exhibition to the palace. From a project manager's point of view, this took a lot of planning and the attention to detail could not have been ever more important. One incorrect document or incorrect detail and the whole installation could have halted.

This exhibition was in for several weeks and the mixture of the modern exhibition in this historical hall made this one of my favourite installs. The pictures do not do it justice.

If you have never visited this building it is simply stunning. 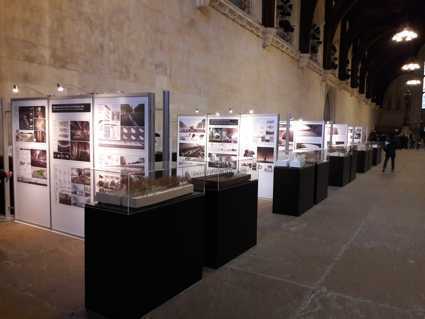 From here we went to Holyrood in Edinburgh where the exhibition was warmly welcomed. Another truly unique building. 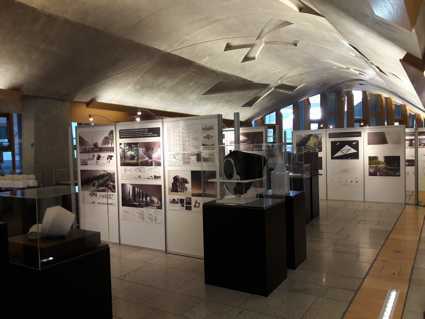 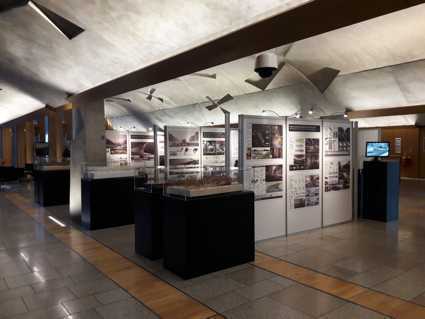 From Holyrood to Manchester Town Hall, Cardiff, the QE11 Centre. . . and there was....

So this year, on the 23rd April, we were asked to install the full exhibition at the Yom Hashoah event at Saracens Rugby Club. This event also entailed high security once again and understandably due to the VIP's in attendance: Sadiq Khan, the Chief Rabbi (we had met him at Downing St), the Israeli Ambassador and many other dignitaries and celebrities. All attending to commemorate this day with the Jewish community.

So you'll understand why our build up on this occasion was accompanied once again by sniffer dogs courtesy of the Met. Why is it so hard to refrain from stroking them. The crew were getting used to their presence by now though. One tried to steal Lee's sandwiches from the van in Downing Street and in the security compound, the crew had to surrender themselves to a 'thorough examination' by the Westminster dogs. A few worried and red faced crew members on that occasion.Once again we were warmly invited to attend the event which for difference reason was one that again we will not forget. Sitting in the stadium we were entertained by Jewish school choirs, cellists and some amazing speakers. Laura Pradelska, from The Game of Thrones series, recounted her grandparents very moving stories. You could have heard a pin drop and it certainly gave myself and the team an even deeper admiration for this exhibition that we had become so involved with. The interest in the exhibition after the main event was absolutely phenomenal and as a team we decided to stay back and assist our clients with the immense interest. The whole reason behind these exhibitions has been to record the feedback from the general public and as one can imagine, the views of Jewish Community were so incredibly important.

After crossing the UK it was almost time for the panel to meet and select the winning design. So what better place to display the exhibition for the final time than the V&A museum in London. This highly prestigious venue is incredibly selective in the exhibitions it holds so UKHMF were delighted to be invited to exhibit here. August sees huge footfall at this renowned London landmark so it was amazing to see the huge interest in this month long exhibition.

A key addition to this exhibition were interviews from two holocaust survivors. These are amongst a whole library of interviews recorded for the information centre by the Broadcaster Natasha Kaplinsky, OBE, who is also a member of the panel. She interviewed and recorded the testimonies of more than 100 Holocaust survivors as part of an 18-month project. She spent time collating the stories of the Nazi death camp survivors so that "children like mine will be able to understand what actually happened at one of the darkest moments of our history”.

Visitors spanning generations ... a holocaust survivor listening to other survivors memories whilst youngsters watch and listen to these very moving videos.... 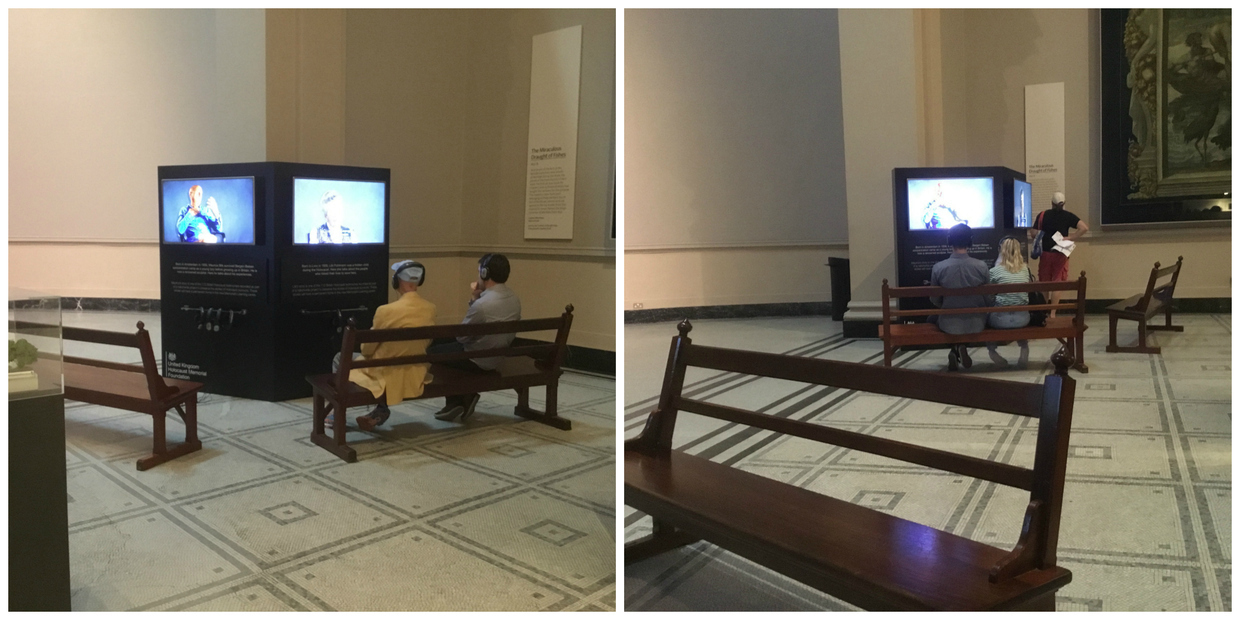 It is very sad to think that there are not many survivors alive now. So this memorial and Information Centre is so incredibly important. Not only to the residence of the UK but very much so for the survivors themselves in ensuring their stories are still heard when there is no longer any one here to tell them first hand . . . . .

We have all been moved by the people we have met and the knowledge we have learnt during the installations of this exhibition. We would sincerely encourage everyone to visit the centre when it is open and hope that you too are humble by what you see, read and learn.

Looking for an exhibition stand?

Compare stands Talk to us

We are here to take the stress and strain of exhibition stand planning away from you.

We're a super friendly bunch, so get in touch and we’ll make sure you're set up with the perfect exhibition stand for you.